Which TYPE OF touch screen Is Best For You?

You interact with a touch screen monitor constantly throughout your daily life. You will see them in cell phones, ATM’s, kiosks, ticket vending machines, manufacturing plants and more. All of these use touch panels to enable the user to interact with a computer or device without the use of a keyboard or mouse. But did you know there are several uniquely different types of Touch Screens? The five most common types of touch screen are: 5-Wire Resistive, Surface Capacitive touch, Projected Capacitive (P-Cap), SAW (Surface Acoustic Wave), and IR (Infrared). 5-Wire Resistive Touch is the most widely touch technology in use today. A resistive touch screen monitor is composed of a glass panel and a film screen, each covered with a thin metallic layer, separated by a narrow gap. When a user touches the screen, the two metallic layers make contact, resulting in electrical flow. The point of contact is detected by this change in voltage. 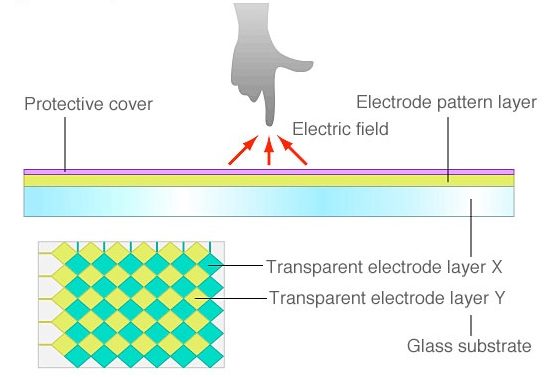 Projected Capacitive (P-Cap) is similar to Surface Capacitive, but it offers two primary advantages. First, in addition to a bare finger, it can also be activated with surgical gloves or thin cotton gloves. Secondly, P-Cap enables multi-touch activation (simultaneous input from two or more fingers). A projected capacitive touch screen is composed of a sheet of glass with embedded transparent electrode films and an IC chip. This creates a three dimensional electrostatic field. When a finger comes into contact with the screen, the ratios of the electrical currents change and the computer is able to detect the touch points. All our P-Cap touch screens feature a Zero-Bezel enclosure. SAW (Surface Acoustic Wave) touch screen monitors utilize a series of piezoelectric transducers and receivers. These are positioned along the sides of the monitor’s glass plate to create an invisible grid of ultrasonic waves on the surface. When the panel is touched, a portion of the wave is absorbed. This allows the receiving transducer to locate the touch point and send this data to the computer. SAW monitors can be activated by a finger, gloved hand, or soft-tip stylus. SAW monitors offer easy use and high visibility. IR (Infrared) type touch screen monitors do not overlay the display with an additional screen or screen sandwich. Instead, infrared monitors use IR emitters and receivers to create an invisible grid of light beams across the screen. This ensures the best possible image quality. When an object interrupts the invisible infrared light beam, the sensors are able to locate the touch point. The X and Y coordinates are then sent to the controller.